How many followers can be reached via SOCIAL MEDIA?

Social Media (SOM) meanwhile counts to the commercially relevant platforms that is used to directly and quickly address a large amount of fans. If one would like to analyse interaction rates on Social Media precisely, it is necessary to take a sophisticated look at the amount of followers / fans respectively. Commonly these are summarised across all media – in the end it is easier to market a larger gross value in comparison to a net value, which would take the usage of more than one channel into account. Additionally, the determination of an actual net value is difficult without cookie-based tracking tools and big data analyses. A new approximation to these numbers is allowed for in a new study by impact&emotions:
61 % of the respondents in a nationwide representative study among the target group of 16-to-69 year olds attested to use a Social Media platform at least once a day, which can be used as a starting value of a potential net media reach. Taking an additional look at the four biggest SOM-channels (YouTube, Facebook, Instagram and Twitter), one can see that these are used by 22% of Germans at least twice a day. 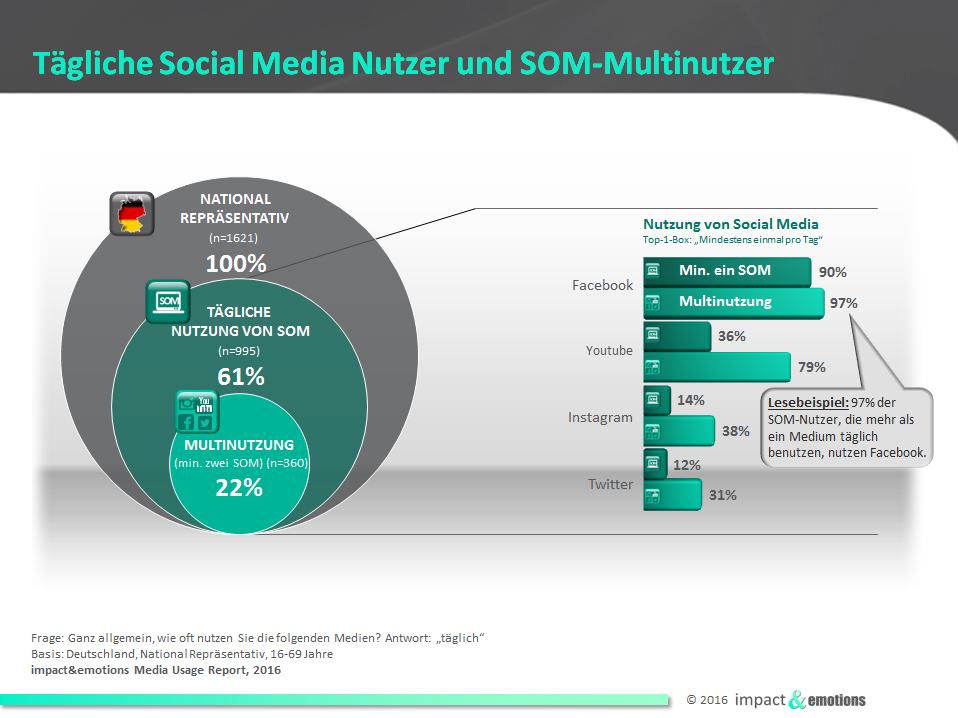 Facebook is still the primary source for SOM-users. 90% of which, who use at least one SOM-channel daily, use Facebook, which translates into an absolute Facebook-reach of 31.9 million Germans. With people that utilise at least two SOM-platforms a day, Facebook is in 97% one of the used platforms so that one can generally conclude that it is usually Facebook and one other platform that is used.
30

The second largest social media network, too is no longer a medium for the youngest generation – the number of daily YouTube-consumers measures up to 36% of respondents in Germany which are 12.8 million people. At the same time, it becomes evident that YouTube is the most independent platform next to Facebook. Merely 76% of daily YouTube-users state that they surf on Facebook the same day. This means that the simultaneous approach of both platforms increases the net reach the most effectively.

The daily users of Instagram amount to 4.9 million, the one of Twitter equals 4.2 million, whereas the chart on multi-users shows that the overlap between these media is the most divergent. Nonetheless, the users of these platforms are predominantly multi-users, i.e. 93% of the daily Twitter-users and 98% of the regular Instagram-users do use another social media platform – in most cases Facebook. This example becomes the most evident with a look at the close relationship between Facebook and Instagram: people that use Instagram on a daily basis, are in 95% of the cases found on Facebook the same day. Thereby one should not mistake followers of Instagram in combination with Facebook as an additional reach of people, but rather additional contacts with a nearly identical number of people. 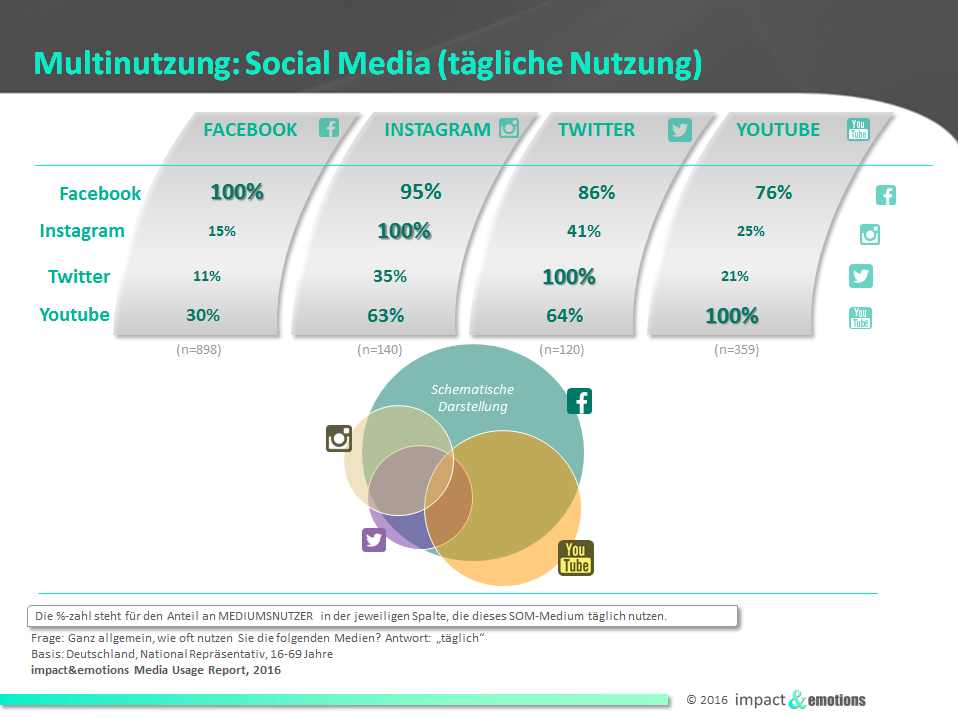 Not every club, every person or every company is featured on all of the presented channels or feeds these equally intensive, so that the individual net reach does differentiate itself from the overall net reach. Next to an overall determination of the SOM-net-reach, the study offers the opportunity to determine the individual net followers.
Depending on the existence of respective channels, the following rule of thumb offers itself for the determination of individual daily net reaches:
100% of followers on Facebook + 8.6% of followers of YouTube + 0.7% of Instagram followers + 1.7% of Twitter followers.
If for instance no Twitter account is featured, this variable is omitted and the net reach is calculated with the remaining available channels.

Hereafter it becomes obvious: merely summing up the gross reach of individual SOM-channels does mean a high number of contacts, but not an equally high number of daily reached people. Whoever uses this approach would claim that solely with the four investigated social media platforms, approximately 54 million people between the ages of 16 and 69 were reached. This would equate to 94% of the total population in this age segment! The actual number of SOM users is with 35 million or 61% respectively clearly smaller. Here the individual number of a potential reach orients itself strongly by Facebook followers and can only marginally be extended by additional SOM-channels. Hence it is paramount to be cautious before paying for immense CPTs, which in reality aren’t even worth two thirds of its supposed reach of people.