How Sponsoring can influence the purchase decision

On April, 23rd 1990 – the shortly following world cup triumph was still to happen – Mercedes-Benz and the german football association DFB sealed a partnership, which celebrates its 25-year existance in this year. Since this day Mercedes-Benz makes its appearance as a general sponsor of the DFB.
Today, 25 years and yet another word cup title later, this relationship is considered one the oldest and most successfull partnerships in german sports.
This fact is also proven by a survey, conducted in 2014 by impact&emotions and MehrSehen° 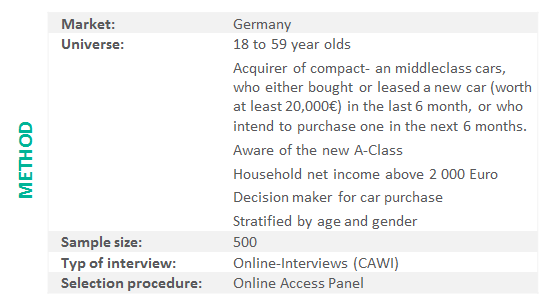 The surveys target was to investigate the impact of advertising on potential car acquirer to consider a test drive at Mercedes-Benz. Therefore a survey was set up among 500 acquirer of compact- and middleclass cars, who either bought or leased a new car (worth at least 20,000€) in the last 6 month, or who intend to purchase one in the next 6 months.
The results prove, that people aware of the sponsorship engagement of Mercedes-Benz and A-Class in particular share a significantly more positive attitude towards the brand: They are more willing to sign up for a test drive and are a lot more emotionally involved in the brand compared to those who do not have any knowledge of the sponsorship. The willingness to inform about the A-Class as well as the actual purchasing decision is demonstrably positively affected, too.
Remarkably the amount of advertisment perception is actually activating the potential acquirer: the more the advertisement was noticed during the football match, the better the brand was appraised and the higher was the willingness to inform and engage more closely with the A-Class.
The sponsoring had a positive connotation throughout all respondents. It was considered informative and people stated the partners DFB and Mercedes-Benz a good fitting.
Together with the campaign during the national football matches Mercedes-Benz managed to emotionally upvalue the A-Class and presented itself as an emotional carbrand. An excellent example for emotionalisation of brands by advertising and sponsoring. 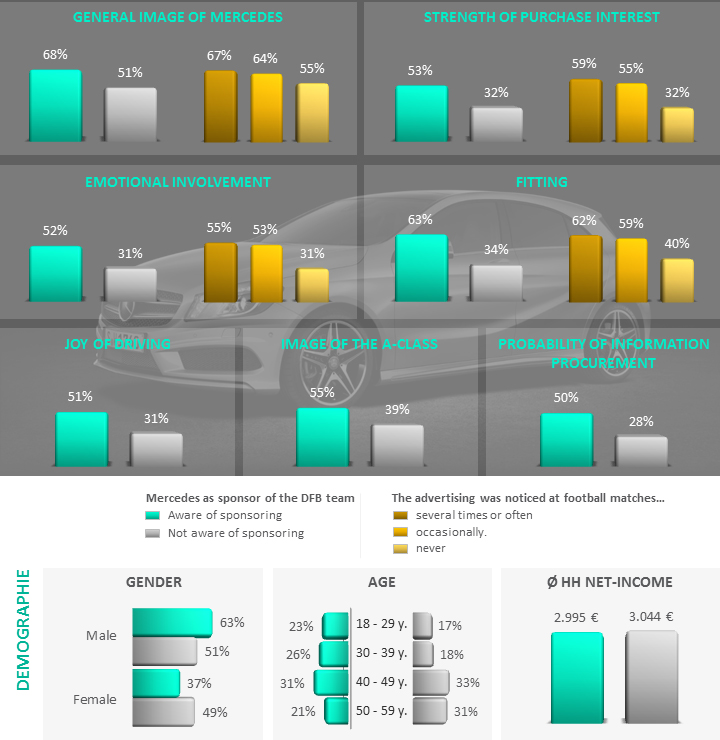